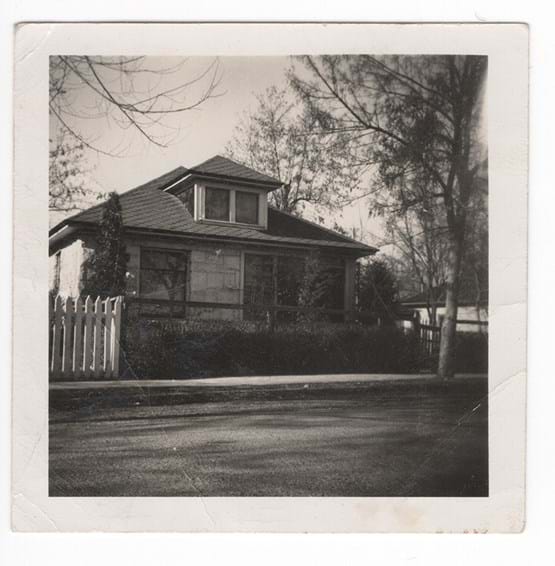 While sandstone is prominent in Boise’s architecture—it was used to build the Idaho State Capitol and many other structures from the time—the Erma Hayman House stands out among the neighborhood’s simpler, wood-framed domestic structures.

The Erma Hayman House is located in Boise’s River Street neighborhood, a district historically populated by immigrants, working-class families, and later, Black Americans who were generally excluded from buying homes in other neighborhoods. The home, now standing on the corner of Ash and River streets in the Lover’s Lane Addition, is the last single-family home on its block. Chester Thompson, a stonecutter and son of early River Street pioneer William Thompson, built the single-story, “veneered cottage” in 1907, two years after the addition was platted and the same year of Erma (Andre) Hayman’s birth. The modest, 900-square-foot house was situated on two 26’ x 122’ lots located in the center of the triangular block fronting Ash Street. (Several structures south of 617 Ash, including those located at 633 and 635, were removed when River Street was widened in the 1960s.) The small size of the property was typical of lots in Lover’s Lane. Maps show that various outbuildings—including an alley dwelling, an outhouse, and a garage—have existed on the homesite over time, though none of them remain today. After the house was built, it changed hands several times before Ms. Erma and her second husband, Lawrence Hayman, purchased it in 1948. Mrs. Hayman lived there until her death more than sixty years later.

The Erma Hayman House simultaneously reflects its working-class neighborhood roots and departs from them. On the one hand, the house’s modest size and utilitarian layout make it a classic example of early-twentieth-century vernacular residential architecture. On the other, its hipped roof, recessed porch, squared corners around the columns, windows and doors, and especially its sandstone construction, set it apart. While sandstone is prominent in Boise’s architecture—it was used to build the Idaho State Capitol and many other structures from the time—the Erma Hayman House stands out among the neighborhood’s simpler, wood-framed domestic structures. Perhaps most notably from a preservation and historical standpoint, the house has seen minimal alteration over the course of its existence.

Mrs. Hayman was an avid gardener, and the backyard and spaces surrounding the house were once lush with fruit trees, flowers, and a vegetable garden. Today, a lilac tree still bears evidence to her efforts, while heritage plantings on the property honor Mrs. Madry Hayman’s love of gardening and dedication to her home.

After her death in 2009, Mrs. Hayman’s grandson, Richard Madry, sold the Erma Hayman House to the Capital City Development Corporation. An extensive archaeological dig took place onsite in 2015—a rare opportunity to excavate the past of a neighborhood whose history has largely been erased. The 10,000 artifacts found, and the five oral histories recorded during the dig, contribute to an ever-growing corpus of research on the River Street neighborhood. When the City of Boise acquired the home in 2018, Mrs. Hayman had been its most recent resident and evidence of her presence could still be seen in the house.